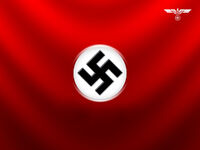 Ever since the enabling act of March 1933, Hitler and the Nazis introduced several policies to ensure the security of their government was safeguarded, and their ideology subliminally exercised on the German population. For some, this would be a state which would bring rights, employment and prosperity, but for many without the true Aryan bloodline, the Nazi militarisation of the nation would introduce years of persecution and restriction which would lead them away from Germany, or towards the German work camps. This was achieved in a series of movements by the NSDAP; but the encompassing regime became known as the fear and terror campaign, stapled by propaganda being turned out by Goebbels’s ministry faster than the actual events happened.

Let’s take a closer look at some of the different methods the Nazis took towards governing the new state.

After nationalising all of the 18 lander states, the Nazis began to impose the new education scheme which would, in the words of Bernard Rust, “train human beings to realise that the state is more important than the individual, that the individuals must be willing and ready to sacrifice themselves for the nation and the Fuhrer”. To put it in plain, and unbiased words, the Nazi education state was completely altered to feed, or indoctrinate, the youth of Germany into adoring Hitler and the Nazis, whilst also making them subconsciously aware of the economic implications of having an invalid population, alongside anti-Jewish (or Semitic) beliefs. Days started at 8 with PE, and ended at 6:30, and after you’d be expected to go to a Nazi extra-curricular club, either the Hitler youth for boys or the League of German Maiden’s for girls. 97% of teachers belonged to the Nazi union the NSLB, and if teachers were deemed inadequate, they’d be arrested. Lessons were altered; now the national curriculum was focussed around history (to show the Nazis greatness) biology (to work on eugenics) and PE (to make a physically fit race). They even went one step further to interfere with the education system; boys and girls were educated differently. Boys were taught aggression and military precision in the system of Ordenburgen; whilst the girls would focus on the domestic life they were expected to lead; or Kirche, Kuche, Kinder, the 3K’s.

A leading official called Gertrude Schultz-Klink stated: “"the mission of woman is to minister in the home and in her profession to the needs of life from the first to last moment of man's existence." The youth were introduced to a state where Hitler recovered Germany from the deceit of the Jewish stab-in-the-back community, in a medieval chivalry. To them, Hitler became a god. God was soon an object phased out of the education system, both to further the Nazi strength, and due to the deterioration of relations between the church and the Nazis in 1937, when Pope Pius XI criticised Nazism. For the adults, average men were given occupations by through a 6 months mandatory conscription duty, and the German Labour Front, building new hospitals, schools and roads (to help indoctrinate the youth, and to provide medical services and efficient transport if war arose). In return, they were given a small wage but the Strength through Joy campaign offered those cheap holidays and the people’s car, the beetle. Women were effectively forced out of work up until 1937, and were encouraged to have large families (women with big families earned bronze, silver and gold motherhood crosses) , and grow crops to increase self-dependency of the country.

To ensure nobody rebelled against the system, the Nazis encouraged the sale of cheap radios to make sure everyone received Nazi news, and if not the fear of a visit from the gestapo or the SS intimidated people into conforming to the Nazi way of life. Propaganda entered everyone’s lives, and soon expressive cultures and music, like Jazz, were trampled out of the system. Books were burnt, and art works of homosexuals and Jews were destroyed.

Hitler engineered society to encourage the idea of lebensraum for the master race, and the employment of terror and propaganda ensured the country marched unquestioningly into WW2.

Retrieved from "https://flashback-history.fandom.com/wiki/Controlling_the_Nazi_State?oldid=4167"
Community content is available under CC-BY-SA unless otherwise noted.