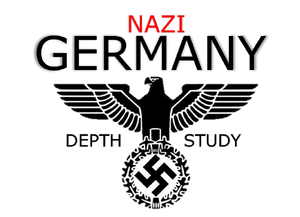 Nazi Germany, a truly fascinating and dynamic super-state engulfed in conspiracy, treachery and manipulation of the public to an anti-semitic,ultra-patriotic and aryan obessed singular body under the control of the Fuhrer. In the GCSE's, Nazi Germany makes up a very important part of your depth study; you'll need to know how Hitler rose to power, how he consolidated control, and what life was like in Nazi Germany, both through Goebbels' propaganda drive, and the Heydrich/Himmler reign of terror.

Explore all of this and more in FlashBack: The origins of the Second World War edition magazine, available for download right here!

The subjects of Nazi Germany:

Robert Harris once noted in his book, selling Hitler, that following the prophets and teachings of the Holy Bible, Hitler and the Nazi party constitute the second largest topic covered in all books ever written. That means in the course of the previous 5,000 years, when the first form of books began, the activity of one party over roughly 25 years has created such a public fixation for details on its functioning, it has become the biggest entity of modern times; in fact a recent survey has concluded that media related to the Nazis has grossed over $725,000,000 from 1930 onwards. Why? The Nazis transformation of the German state into an occultist, dystopian unit to rein terror upon the world... [[Read More>>]][[1]]

Retrieved from "https://flashback-history.fandom.com/wiki/German_Depth_Study?oldid=4218"
Community content is available under CC-BY-SA unless otherwise noted.