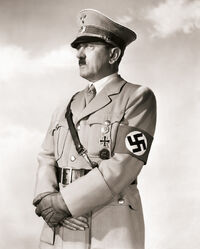 Robert Harris once noted in his book, selling Hitler, that following the prophets and teachings of the Holy Bible, Hitler and the Nazi party constitute the second largest topic covered in all books ever written. That means in the course of the previous 5,000 years, when the first form of books began, the activity of one party over roughly 25 years has created such a public fixation for details on its functioning, it has become the biggest entity of modern times; in fact a recent survey has concluded that media related to the Nazis has grossed over $725,000,000 from 1930 onwards. Why? The Nazis transformation of the German state into an occultist, dystopian unit to rein terror upon the world, to the extent it sought to eliminate the Jewish problem with the Final Solution, is something so ground-breaking and desperately inhumane that the general public thirst for the knowledge to comprehend how and why Adolf Hitler, a failed artist, under-performer and somewhat socially defected man from Austria managed to win the heart of the people, overthrow a democracy, and steer the world down the path of war. This article will explore when the Nazi party became established, how it operated during the 1920’s, and why in 1932, they won a majority in the Reichstag.

In 1918, the new provisional government in Germany signed the November Armistice. The First World War was over. The foundations of the Second World War were already being laid. A message runner by the name of Adolf Hitler was sent to Munich in an army division of the Reichswehr to help maintain peace in the area. He was appointed Verbindungsmann (intelligence agent) of the reconnaissance commando, and was tasked with infiltrating a suspected left-wing party growing in the region; the German Workers’ Party (Deutschearbeitepartei or DAP). The party was, however, extremely right-wing, and the policies resonated with Hitler’s own political beliefs. His newly kindled interest in Politics, especially Anton Drexler’s views on the Jewish, capitalism and communism. On the 12th September 1919, Hitler joined the DAP as its 55th member. By 1920, Hitler had persuaded the DAP to change its name to the National Socialist German Workers Party (or the NSDAP, and more commonly, the Nazis), and the party adopted a new 25-point programme which contained ideas on anti-Semitism, nationalism and vague socialist elements. By 1921, Hitler had become party leader and it employed Hitler’s newly designed logo; the swastika. The red represented the people, the white purity, and the swastika itself embodied, in Hitler’s words, "a symbol of our own struggle”. Ironically, the swastika had, for 3000 years before the Nazi utilisation, symbolised life and good luck.

“A symbol for our own struggle”

Hitler also went about setting up the Sturmarbeitung (or the SA), and shortly after 1920, the NSDAP generated 50,000 members.

In 1923, the French army occupied the Ruhr, after the German government failed to pay an instalment of the reparation bill. Under Stresemann, the passive resistance held by the works of the industrial heartland was called off, much to the dismay of the Nationalists. In November, Hitler took over a beer hall where Bavarian officials were congregating, to try and get support for a march on Berlin. He was unsuccessful, but undeterred; with the support of General Ludendorff, he tried to initiate a beer hall putsch, but with Ludendorff late, and the police quick to intervene, the putsch collapsed. 16 Nazis and 1 policeman died during the uprising, in which Hitler fled, but was later arrested. He was put on trial for treason, but in court he managed to use the situation to boost his campaign on a national level, by making long Speeches which was met with sympathy across the nation. On April 1st, Hitler was sentenced to just 5 years in a low security prison called Landsburg, with the privilege of limited communication. Here, he dictated Mein Kampf, and began to theorise a new method of gaining power. He was released after just 9 months, released on the 20th December 1924. His policies had changed dramatically; now, he wanted the Nazis to democratically enter the sphere of politics: “If outvoting them takes longer than outshooting them, at least the result will be guaranteed by their own constitution. Any lawful process is slow. Sooner or later we will have a majority, and, after that – Germany!” Unfortunately for him, democracy seemed to be working. Stresemann was working wonders to create the German ‘Golden Years’, a time where Germany was its most stable during the inter-war period. The Dawes plan adjusted the reparations, and gave Germany a generous series of loans to help them back on their feet. The Locarno treaty secured German frontiers, and in 1926, the Germany became part of the League of Nations. This was a time for prosperity, films, jazz, and cabaret – everything the Nazis loathed.

The Golden age of the latter half of the 1920’s was a hard time for the Nazi party. For some time, the party had been banned, and its followers flocked to other parties now democracy was working. In 1925, Hitler re-founded the Nazis, with Hitler centralised in its operation. Special sections like the Hitler Youth were founded, and in 1926, Goebbels took control of Nazi Party propaganda, and exercised a bombardment of Nazi media. He also introduced selective propaganda to target communities, a great example being Northeim, where agriculutural issues were tackled by the Nazis. By 1928, the Nazis had just over 100,000 members, due to the success of propaganda, the new structure of the Nazi party (which boasted order and hierarchy), the success of Hitler’s oratory and the new Nazi Speakers. Hitler also aimed to gain the support of industrialists, but still kept violence at the forefront of his agenda, especially with the new personal bodyguard, the Schultz staffel (SS)

The Wall Street crash plunged Germany back into economic disarray. They lost the vital funds from America, and resultantly unemployment went from under 1 million in 1928 to over 6 million by 1932. The coalition government collapsed in March 1930, so Hindenburg appointed Bruning Chancellor. When he failed to get support in the Reichstag, Hindenburg increasingly ruled by decree. The industrialists feared communism, so they began to support Hitler. A massive campaign ended with the Nazis becoming the biggest party in the Reichstag in July 1932, with 230 seats. In January 1933, Von Papen persuaded Hindenburg to appoint Hitler chancellor; the first step towards the installation of a dictatorship.

Retrieved from "https://flashback-history.fandom.com/wiki/Hitler%27s_Rise_to_Power?oldid=4217"
Community content is available under CC-BY-SA unless otherwise noted.