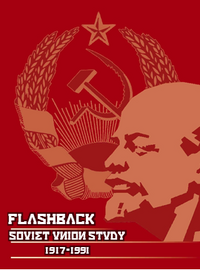 Mother Russia! Russia. The largest country in the world, the first successful communist state installation and the birthplace of Vodka. Today, Flashback will be taking a look over the rich history of the rise and fall of the Soviet Union in Russia, perhaps one of the most interesting and diverse nations that played a major part in laying the foundations of modern history.

The winter palace defence has fallen. The Cossack forces crushed, the last Tsar of Russia; dead, alongside his wife and children. A group of revolutionaries known as the Bolsheviks celebrate as their objective to overthrow the monarchy had succeeded. The prominent leaders, Leon Trotsky, Alexi Rykov stand by the soon to be dictator of the newly founded soviet union, Vladimir Illich Lenin. This special Soviet Study is dedicated to the best of Orwellian realism history, and will be available in March 2012!

Retrieved from "https://flashback-history.fandom.com/wiki/Russia?oldid=4143"
Community content is available under CC-BY-SA unless otherwise noted.