A prologue to the Treaty 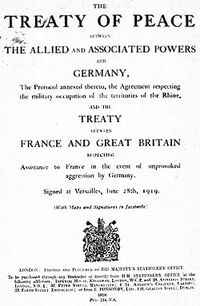 Across the decimated land which once was the scenic fields of France, bells began to toll. After 4 years of turmoil and bloodshed, the war in Europe was over. The German nation was finally toppled by the starvation plaguing the cities of the fatherland, by the death and destruction in the western front, and by Kaiser Wilhelm II’s abdication and exile to the Netherlands. The fate of the world was now on the shoulders of the victors, who would determine the future socio-economic wellbeing of the losing nations. The collective ruling on the defeated would be embodied by a series of treaties, such as Sevres, St. Germain and Trianon, but the most revered (and reviled) treaty was to be the pact on Germany – The Treaty of Versailles. Also known as the Paris Peace Conference, the Versailles discussions opened on the 12th January 1919, six months after the armistice, and would last around a year. Leaders and dignitaries of 32 nations representing 75% of the world’s population would convene in the hall of mirrors to debate on the terms of the treaty. In the fallout of the Russian Revolution, Russia did not attend, but those still willing to join in all had different views on how to deal with Germany. Pragmatic men like Lloyd George were conscious of the economic repercussions of condemning Germany, whereas leaders such as Georges Clemenceau wanted to see Germany obliterated, annihilated, devastated to an extent where the nation would tip over the edge of chaos and dismay – this would be the just revenge for the pain inflicted upon their nation. Germany was not permitted to have a voice in the policies discussed by the treaty, hence why the final document became known as a Diktat, a dictated ruling.

Who were the Big Four?

Originally, the major players at the hall of mirrors were part of something known as the council of ten, a group of head ministers from the 5 top nations – America, Britain, France, Italy and Japan. This conference was ineffective and too formal, so alongside the departure of Japan, foreign ministers left the Council, leaving what we know as the Big Four: Lloyd George, Vittorio Orlando, Georges Clemenceau and Woodrow Wilson.

Britain had been part of the war ever since 1914, due to their political ties to Belgium. The nation sustained heavy infantry injuries, not to mention the collapse of the empire and the large monetary debt owed to the USA – the British people wanted the German’s to pay for the war, Sir Eric Geddes quoted the aim of the Britain’s presence in Versailles was to "squeeze the German lemon until the pips squeak" - but to crush Germany would destroy trading links between the two countries. This would drag Britain into a deep economic crisis, so overall Lloyd George sported a view that moderate reparations should be imposed on Germany. He also wanted to ensure the naval presence of Germany was reduced; after all it was the naval arms race which contributed to the war initially. Lloyd George became a middle man between Wilson and Clemenceau, who were both on the polar extremities of the decision making spectrum - he was supportive of Wilson’s proposal of “self-determination”, but he also was in line with Clemenceau’s idea for secret treaties and naval blockades.

Germany brought warfare to France’s doorstep, leaving its landscape and people ravaged, scarred and demoralised in the support for its democracy. Clemenceau entered Versailles to best express the French societal view; full out revenge upon Germany for the desecration of peace. It was his domineering attitude and vicious brutality which soon warranted his old nick-name from politics, “the tiger” at the conference; he went in with the claim, “Justice is what the German Delegation asks for and says that Germany had been promised. Justice is what Germany shall have.” But soon went on to demand for extortionate reparations to cover debts “which exceed £30,000,000,000” He wanted to also ensure land was reimbursed with compensation from the franco-prussian war in 1870, with the non-negotiable term that Alsace-Lorraine was taken back from Germany. Furthermore, he went on to demand that Germany had its military presence abolished so France would never again be invaded.

Woodrow Wilson – President of the United States of America

Wilson came to Versailles a hero; great crowds rallied to see his entrance to the Hall of Mirrors, for America would embody the power, the influence and the logic to bring peace to a devastated Europe. America entered the war relatively late, and its casualties were minor in comparison to the fatalities of France, Britain or Germany. In the eyes of the American congress however, it was a war which cost the lives of American men in a futile European conflict, which was a war outside of their politics and therefore concern. It was imperative that Wilson went there to create peace, but more importantly ensure America was kept out of any future conflict outside of the US territory. This was known as an isolationism ideal. The aims he would take into Versailles would be known as the 14 points, (see photo) and would include self-determination, disarmament and most importantly an establishment of the League of Nations, a League which America would not be part of. You can find out more about this in the League during the 1920’s article.

When war started in 1914, Italy originally backed the German effort, but in 1915, the Italians would go on to sign the Treaty of London, to declare war on the Alliance and join the Entente, in return for land at the end of the war - Tyrol, Dalmatia and Istria. During the peace conference, Vittorio was less concerned about the peace policies because he’s priority was to make sure the land promised to Italy was given to Italy.

So what was the outcome?

The Treaty of Versailles, amongst other things, was blamed by historians past and present as the cause of some of the most detrimental events of the 1920’s – the Weimar Failure, the global economic instabilities and ultimately the Second World War. But why did this happen? One factor was the harsh terms agreed on in the treaty, below are the 3 main results outlined by the Treaty of Versailles:

§ Military: Germany’s military was limited to 100,000 men, there were to be no tanks, air force or submarine vehicles, but 6 naval dreadnoughts were permitted. The Rhineland became a demilitarised zone and the land was to be guarded by the allied forces for the next 15 years. Anschluss (unification) with Austria was forbidden, mitigating the strength of the state and also limiting the economic potential of the country.

§ Financial: The reparation bill was initially placed at a monumental £6,600 million, although this was a fraction of what the French had demanded, it was still a bill which would strain the German economy. The industrial and raw material heartlands of Germany, the Ruhr, the Saar and Upper Silesia were major blows to the GNP of Germany. Overall the country lost 48% of Iron, 15% of agricultural industry, 10% coal, 12% of people and 13% of land.

§ Territorial: Germany lost several areas of its empire, to satisfy the victor nations and to reduce the power the state could possess. Poland became an independent country with a ‘route to the sea’ which created a corridor to split the nation in two; Danzig would become an internationally governed region. All German and Turkish Colonies were taken away and put under Allied control and Finland, Lithuania, Latvia and Czechoslovakia were made independent. Austria-Hungary was split up and Yugoslavia was created. Of course, Clemenceau ensured that Alsace-Lorraine was given back to France.

Another final major part of the Treaty of Versailles which particularly angered Germany was Article 231. The War-Guilt clause. Germany was to accept all of the blame for the war, which infuriated the patriotic people of Germany, who had been at war for four years – the article served as a major blow to morale. Not one leader was satisfied by the treaty, and it became a compromised agreement. Clemenceau felt the German’s were let off too easily, Wilson felt the treaty condemned the longevity of the peace the conference was to create and Lloyd George felt mild forms of both of these issues faced by these two men, alongside a resentment that Germany still had 6 capital ships. Vittorio Orlando left Paris irate, as Italy did not get all of the land promised to them by the treaty of London. There was even a point where the conference was to collapse, because Clemenceau disagreed deeply with Wilson – it was in fact Lloyd George who stepped in to save the negotiations by publishing the Fountainbleu Memorandum in March, persuading Clemenceau to agree to points outlined by Wilson.

Germany were faced with two options, sign the treaty, or face invasion by the allied forces. The provisional governing system left behind in Germany agreed to sign the treaty on the 28th June, 1919 – 5 years after the assassination of Arch-Duke Franz Ferdinand. The German’s believed they were signing onto Wilson’s 14 points, but after the harsh reality of the ruling was made public, German’s began to cultivate the popular stab-in-the-back myth, which branded the men who signed the armistice in 1918 the November Criminals. These men would go on to build the Weimar Constitution which would become German’s first (unsuccessful) democracy. In one last gesture of defiance, the captured German naval force held at Scapa Flow (north of Scotland) scuttled itself. Many in the military who disagreed with a ceasefire went on to become the Freikorps, active paramilitary units which went across Germany attempting revolutions. Although ordinary people could not bear to comprehend the future for Germany, their leaders were forced to sign. The repercussions of the Treaty would send shockwaves which would alter Germany’s future, forever.

Retrieved from "https://flashback-history.fandom.com/wiki/The_Treaty_of_Versailles?oldid=4123"
Community content is available under CC-BY-SA unless otherwise noted.