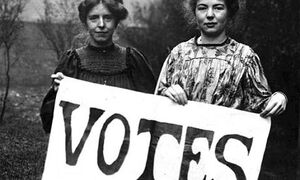 Throughout the 1800’s, men gradually won the right to vote in the general elections which used to be restricted to only a few people in Britain. Despite this, women remained without the vote, and they were not equal in education, occupation or status. Social rights developed at a slow rate for women as they could not get the education to understand political issues; in fact it was commonly viewed that women could only comprehend domestic matters, such as cleaning, clothing and other house management skills.

Things did change, however, in the late 1800’s. The first instance of a woman changing a political decision occurred in 1881, when Josephine Butler successfully campaigned against the Contagious Diseases Acts, a series of laws which were enforced in army establishments and port-towns which allowed for any woman to be forcefully taken into a medical facility and examined for STI’s, if they were accused of being a prostitute. Josephine Butler, who had examined living conditions of women in the workhouse, believed this Act completely negated women’s rights, making them no more than pieces of meat that were to be used by soldiers and prodded at by scientists. She founded the Ladies Association to campaign against the act, and after a long campaign, on her birthday, 20th August; the Acts were rejected under scrutiny by Parliament. The impact of Josephine’s work didn’t just improve the rights of women in the circumstances, but demonstrated to the nation women could decide the Act’s passed by Parliament, a much greater and lasting effect which would lead to the growth of suffrage installations in the UK.

In 1897, the National Union for Women’s Suffrage Societies was established by Millicent Fawcett, and it was an organisation of women who would be collectively branded suffragists (originating from the term suffrage). Suffragists held the values of peaceful, yet defiant, protest; which ranged from rallies, speeches and marches to encourage support, and methods of civil disobedience such as refusing to pay taxes.

Between Winston Churchill and Sir Edward Grey to reduce the respect of political figures and to create controversy in the eyes of the media, which would subsequently lead to coverage which would highlight suffrage to the masses. They were said to have shouted "Will the Liberal Government give votes to women?" repeatedly in the crowded hall. When the women refused to stop shouting the police were called to evict them from the meeting. Pankhurst and Kenney refused to leave and during the struggle a policeman claimed the two women kicked and spat at him. Pankhurst and Kenney were arrested and charged with assault. After refusing to pay a five shilling fine, they’d be sent to prison, an occurrence of events which would shock the nation. The result was terrific; for once in a long time the female suffrage was back in the newspapers, and interest in the subject soared. Hannah Mitchell, a suffragette from the time, stated “20 years of peaceful propaganda had not produced such an effect”.

Women of the WSPU, soon branded suffragettes by The Times newspaper, would go on to continue a violent regime, which was known as a militant approach, and in the early years this meant chaining themselves to railings, breaking windows, attacking MPs and police officers to pressure the government and to spark a public reaction which increased awareness and support for the cause. Of course, the police stepped in occasionally to put women into prison, but there was another trick up the suffragette sleeve – hunger striking.

The main objective of the suffragists was to gain influence over backbenchers in Parliament, to slowly but surely raise the issue of suffrage in a political light. Progress, some members would have complained, was too slow, and radical methods would have to be used if they were to get the vote in their lifetime. In 1903, a widowed woman by the name of Emmeline Pankhurst, alongside her daughters, created a breakaway organisation, which she named the women’s social and political union. In its infancy, this small party had a modest amount of members and made little progress in their pursuit for enfranchisement, so in 1905 Emmeline’s daughter Christabel Pankhurst, alongside Annie Kenney, a working class member from East-London, planned to disrupt a political meeting Women who simply refused to eat in prison had to be let free on medical grounds, which was great for the campaign and an effective tool for suffragettes up until 1909. The government were distressed about the lack of control they could put over these women – if they couldn’t put them in prison without them leaving in a week or so, what could they do? They would force-feed them. The account from Mary Leigh:

“…while I was held down a nasal tube was inserted. It is 2 yards long with a funnel at the end – there is a glass junction in the middle to see if the liquid is passing… great pain is experienced during the process both mental and physical … they must have seen the pain, for the other doctor interfered (the matron and two of the wardresses were in tears)….”

vividly describe the painful experience suffragettes endured in these prisons. The movement was so controversial that the WSPU used it to their advantage to graphically depict the liberal Government as an over-powering, over-controlling party. Once again, the suffragettes overcame the Governments obstacles to their advantage, meaning once again they could continue their assault on public and private property, harass politicians and generally disrupt any governmental action. After 1910, the campaign grew more and more violent. After the failed attempt to secure the vote in the conciliation bills, the suffragettes turned to explosive actions; quite literally. They started to deliver bombs to various locations and they started to post paraffin soaked rags into pillar boxes which they then ignited, a devastating weapon that would be used throughout the 1910’s.

Surprisingly, the first use of incendiaries was not a planned approach by the WSPU. A woman known as Emily Davison, one of the first women to have left Oxford with a degree, was in fact the mastermind of the new terrorism that the WSPU would use. A strong, defiant woman, Emily Davison would actively seek to benefit the cause become a major figure in the WSPU after the Strangeways prison controversy and wrote weekly in the magazine votes for women. She became convinced after another period in prison that the enfranchisement would only come if the cause had a martyr, and so she tried to kill herself by jumping from an iron staircase; however wire netting prevented the critical injury she’d hoped for. She decided to plan an event that would produce maximum publicity, and in 1913, she executed it perfectly. She decided to take out the king’s horse, Anmer, in the Epsom Derby, the most important horse race of the year. In doing so, she was trampled to death, in the eyes of spectators, film reels and cameras. She’d become the martyr for the cause, just as she’d wanted.

The movement pushed on, the novelty factor starting to die in the public eye. The Government brought in the Cat and Mouse Act which re-arrested women who’d recovered from huger striking, and the readers of the suffragette newspaper had dropped in circulation by about two thirds. Adela Pankhurst had been banished to Australia in 1914, Sylvia had disbanded from the organisation and Christabel was in exile in France, whilst Emmeline was pursued by the law; but then in the later half in 1914, something monumental happened. Britain was at war with Germany. The situation this would create would perhaps be one of the defining points in women’s suffrage, by 1918, women +30 could vote as a result of the Representation of the People Act, after an overwhelming 385:55 vote in favour of its passing.

'The war revolutionised the industrial position of women - it found them serfs and left them free.' – Millicent Fawcett, leader of the NUWSS.

As men went to war, thousands of occupations were left free, and the only people left behind were the women. Traditional jobs usually only available to men were taken up by women, demonstrating they could equally handle what men could –in fact engineering sectors boomed and over 400,000 women became clerks or secretaries, and during the shell crisis in 1915 women that worked in munitions factories (who became known as munitionettes) were integral in keeping the armament supply on the western front constant. Also the land army alongside military based units like the WAAC, WRNS and WRAF embodied by the efforts of women. The efforts were commendable, and the fears of the pre-war militancy re-engaging drove many to vote for the enfranchisement of women, the lasting legacy of a controversial movement.

Retrieved from "https://flashback-history.fandom.com/wiki/Votes_for_women?oldid=4107"
Community content is available under CC-BY-SA unless otherwise noted.